Retired, but as busy as ever

From a baptism of fire at Farmers, through to golden times at LM Rankine, where is Robin Cooper now? Merv Robertson reports. 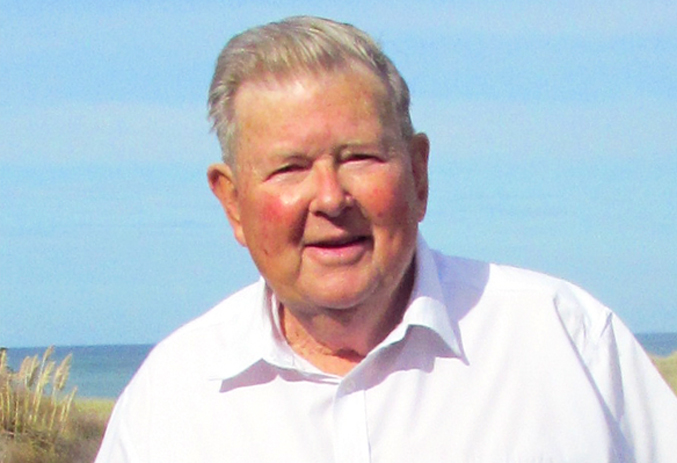 Robin Cooper’s first job was in the appliance department of Farmers in Hobson Street and he well remembers his first day in January 1953.

“I was both exhilarated and terrified. It was the opening of the famous ‘No Interest for Terms Sale’. At 8.30 I was shown how to write a docket and positioned as salesperson for a Kelvinator refrigerator.

“At 9.00 the doors opened and the lifts disgorged a horde of people, all rushing towards us, desperate to make their purchase of choice.

Having survived the experience, aged just 21, Robin was made Ground Floor Supervisor, overseeing several departments as well as a team of “hard-bitten lift girls who quickly worked me out and made my life hell.”

Still only in his mid-20s, he was appointed Buyer for China & Glassware and this category, along with Appliances, became a passion.

During this period Robin also fell for Coralie Brooks, Farmers’ Home Appliance Secretary, and they married in 1957. In 1963, Robin, Coralie and their three sons moved to Wellington.

After flirting with the apparel industry, he rejoined Farmers in Cuba Street as Senior Buyer for China, Glassware and Hardware. He also managed all the other ground floor departments – but, after three years, had had enough.

An agent of change

In those days, many small importers couldn’t afford to put reps on the road and looked instead to commission sales agents for representation.

“A bit restless”, Robin Cooper saw this as an opportunity and formed his own company, Cooper Agencies, selling lamps, cosmetics, furniture, china & glassware, artificial flowers, toys and other lines, some of which he brought in himself, having purchased import licences.

Robin travelled the country visiting gift shops and variety stores, plus some department stores as “cream”. It was a “lucrative game”, with retail prices something like 450% above landed cost.

The agency ran for some six years before Robin and Coralie returned to Auckland to be near his terminally ill father and ailing mum. This was a challenging time.

Following a spell selling real estate and after Cooper senior’s passing, it was back to Wellington where Robin joined PSIS as Retail Buying Co-ordinator of its 25 stores.

Robin was responsible for merchandise ranging from whiteware to glassware, brown goods to DIY and everything in between!

What’s more, the group was “in a mess”, with each store manager buying independently and, unbelievably, budgeting for a million dollar loss.

Robin decided it should at least break even, which it did in the first year, thanks to centralised buying and, because import restrictions were easing rapidly, some exclusive lines.

“The public had been starved by shortages and poor selection, so there were chances to strike gold,” says Robin today.

At that time, PSIS had a great relationship with its glassware, china and kitchenware importer, LM Rankine Trading Company so Robin approached Michael Park to find a good quality portable radio which PSIS could bring in in bulk and market exclusively.

Michael returned from one of his frequent trips to Korea with samples from Lucky Goldstar. A small Goldstar-branded portable audio line followed, along with blank audio and video tapes, and that’s how the brand, now known as LG, first appeared in New Zealand.

Robin stayed with PSIS for four years, turning the business around from a $19 million loss-making turnover to one bringing in just over $55 million and making a profit.

Around 1986 however he pulled out, joining Jackel Marketing to run its short-lived mail order division.

Meanwhile, LM Rankine had become the New Zealand Goldstar distributor. And, in 1989, with the brand gaining traction, Robin Cooper was recruited as Sales & Marketing Manager.

Goldstar’s rapid growth was impressive, due in no small part to Robin’s personal relationships with the retail groups. But, as he is quick to point out, Robin’s team – which variously included Brian Gerrard, Tony Blair, John Feron (later Central Betta Electrical aka Applianceplus), Johnny Johnson and Rob Morris – also worked with great application to capture share in a tough environment.

From October 1997, Goldstar would become known as LG and the Kiwi team were then truly part of the global family. 10 years later, Michael Park would sell the business to LG.

Back in 1999, after 56 years, it was time for Robin Cooper to say goodbye to the industry and he and Coralie moved to the Wairarapa.

Today, Robin maintains a keen interest in the business world and, as he tends to a considerable expanse of lawn aboard his ride-on mower, he has plenty of time to contemplate his share portfolio and commercial property interests.

“I can’t shut down,” he says with a chuckle.