Since its inception CES has always offered a mix of coming very soon and the purely inspirational. So what was pie in the sky and what made sense? Steve Bohling reports. 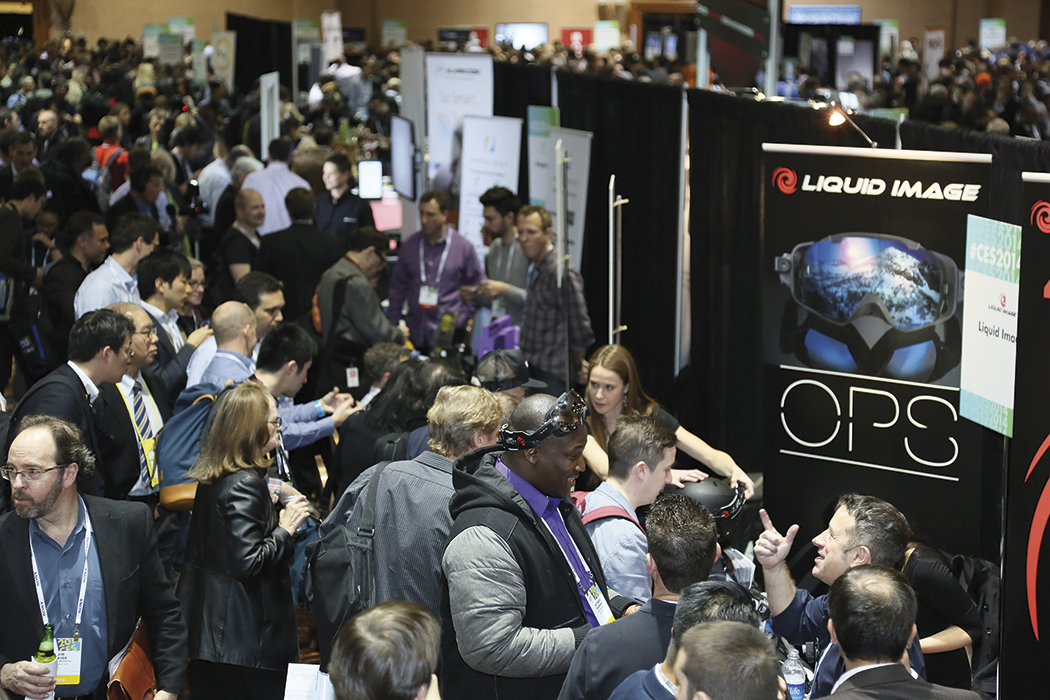 In any attempt to summarise an event the scale of CES, it’s almost impossible to include as much detail as I’d like. But it’s also hard to ignore some of the underlying innovations at Vegas.

Take 3D printing: in 2013 it all sounded like pie in the sky, but this year there were 30+ companies at CES with 3D printing related offerings and talk of hundreds of thousands of sold units. As ever, right now, the price of this new tech however remains a barrier to mass marketing…

And what’s all this talk about automobiles from Vegas? Are cars the OS wars’ next battleground? CES had driverless automobiles, park-it-for-you functionality. Chevrolet had an app store. Ford had car to car communication. And GM had internet connectivity…

On top of all that, iOS is going in-car with one set of car makers while another group has gone Android. So, instead of choosing an Audi or a GM, in future you may be choosing between an Apple or a Google...

On to more focused matters. TVs are getting smarter and smarter but, without content, even the biggest, sharpest, thinnest, smartest TV is just a big, dumb black rectangle. Like a picture frame without a picture in it.

Last year’s CES show included the debut of nearly-there Ultra HD TVs and this year they were back as market ready products. With the apparent failure of 3D in mind, the race to improving technology and higher and higher resolution is all well and good but it’s all empty promises if there is no 4K native content…

So the good news at the show was that 4K content is on the way from Netflix. What about terrestrial TV content providers in all this? Around the show, Netflix wasn’t just teasing other content providers by asking if 4K TV might not be the first internet-only TV format…

Although lacking a booth at the show itself, Netflix made much noise around Vegas by announcing that House of Cards Season 2 would stream in 4K later this year and that every major Netflix series would be shot in 4K from now on. Breaking Bad would also be remastered and streamed in 4K. All of which puts Netflix sitting pretty with other content providers said to be way behind.

A couple of brands were showing off their takes on interactive TV – for example LG had dynamic real time sports stats to go with the NFL match you’re watching on the TV. The danger, said one pundit, was that although this may seem too much for the casual viewer it might not be enough for the hard core US sports fans. Look at the wealth of stats around the average NFL or NBA match, let alone the Superbowl…

Then there were TVs with streaming social features – Sony for example had a model that placed live social media content around the main viewing content. And when it came to form factors (the hardware if you will) you couldn’t ignore the new curved displays from Samsung and LG or Sony’s dramatic, wedge shaped TVs that were thicker at the bottom than the top. Sony was using the additional space to cram in better speakers with the promise of better sound for a flat panel TV…

WEARABLES – A HEALTHY CATEGORY IN THE MAKING?

It seemed there was a lot more variety and quite a bit more segmentation in this market (these markets?), even though there was an undertone of disappointment among pundits that wearables weren’t stronger at CES this year.

The question yet to be answered is: is there a market beyond smart watches and fitness trackers? What about smart socks, or bracelets that keep tabs on how much sun you’re soaking up? Pebble – already now into its 2nd generation product with the Steel – may have developed extremely quickly from a Kickstarter start-up to commercial reality but is the sky really the limit for wearables?

Forecaster Accenture believes that the market for digital health and fitness technology (actually quite distinct markets) will grow to as much as US$8 billion in revenue by 2018 which is a fourfold increase on last year.

Meanwhile, Canalys says that although just over 200,000 smart wearable bands shipped in the first half of 2013, this figure is set to explode fivefold in the second half of the year. Some of this is down to Samsung’s marketing effort around the Galaxy Gear (800,000+ units in its first two months on sale), while Pebble “continues to grow rapidly”.

But the market for smart wearables is “extremely dynamic. This space is going to look very different in 12 months’ time,” says Canalys, adding that wearables have a “unique set of constraints for vendors and platform owners more experienced with the smart phone and tablet markets”.

Still, Canalys anticipates that 2014 will be “the turning point” for smart wearable devices and that “major growth opportunities” are coming with the launch of improved technologies…

Connectivity has developed from being an undertone among exhibitors to being a significant and persistent factor – whether you’re talking about consumer electronics, appliances or cars these days, it’s how (rather than if) they talk to each other that’s beginning to matter.

Gamers will be able to “play games the same way they stream TV, movies and music”, says Sony. PlayStation Now will start with PlayStation3 and PlayStation4, and expand to PlayStationVita, BRAVIA TVs and then other Sony and non-Sony devices.

Also relevant to the connected home is the adoption by Panasonic of Firefox OS on some of its smart TVs as a potential basis for a hub towards a connected home and we hear that LG may have a similar outlook, what with the purchase and subsequent adoption of webOS for its TVs.

Two other instances of connectivity with a televisual link at Vegas were from the USA’s Dish and Danish start-up, Airtame.

Dish’s Virtual Joey networking app is coming first to LG smart TVs and PlayStation consoles. Requiring Dish’s normal DVR set-top box, you get multi-room access to live TV or recordings by connecting to your home network and then installing the app.

If you know what Google Chromecast, the Sony Bravia Smart Stick and Roku Streaming Stick are for – that is, providing video content to internet-connected TVs through an HDMI port – then Airtame is similar.

However, Airtame is designed for wireless PC screen-mirroring  for Linux, Windows and OS X computers. Described as “a Miracast dongle on steroids” there are obvious pluses for people who may not have other means of streaming content off their PC to their TV. Airtame is said to ship mid-year.

APPLIANCES AND THE SMARTER HOME

Smart appliances (whiteware that is) took another step towards more daily and widespread usability with more both market ready and concept products at Vegas.

Even though connected appliances are now starting to focus on using smartphone apps for connectivity and to truly integrate them into daily usage, one pundit still suggested it might take an FMCG player (Amazon for example?) to bite the bullet and offer e-commerce that meshes with these smart appliances before their potential is truly realised.

Another maybe-cool and somewhat smart appliance came from Whirlpool, whose CoolVox fridge (destined for Lowe’s stores!) has an embedded Bluetooth speaker system made by Harman Kardon.

Another “out there” concept at the show from the same brand was an induction cooktop that was blended seamlessly into a kitchen benchtop. The display and controls appear only when needed but the really “smart” thing about this concept was that it also displayed Facebook...

And then high-end Californian brand Dacor had a cooktop with an interface that used Android as an operating system and paired with a smartphone for remote control. Remote control? Try that with a soufflé…

Looking to SDAs that connect, Belkin had teamed up with with Jarden Consumer Solutions to create the Crock-Pot WeMosmart slow cooker (at a US$99 price point) which can be remotely operated through a smartphone. Part of Belkin’s WeMo family of home automation products, there was a range of other co-branded products from heating to coffee makers at the show.

So CES 2014 was substantially about making connections, between products and between users and products. All good in theory, but one is left with the feeling that it’ll take more and more concrete advantages than some brands are currently offering for many of these connective concepts to take root.

LOCAL YOUNG RETAILER HAS EYES ON THE PRIZE IN VEGAS

Matt Suckling of Noel Leeming Hastings was in Vegas as part of his 2012 Young Retailer of the Year win. Here is his report:

“Attending CES for a second time was surreal, with the sheer scale of the show simply awe-inspiring. Despite hundreds of booths and exhibits, the show is so well organised that navigating your way around through the masses is surprisingly easy. Seeing the upcoming technology really gives a glimpse into the future of the industry, with the speed, functionality and design of new products obvious throughout the show.

“For me, the Samsung and Canon exhibits were the highlights. Samsung’s range from whiteware to tablets to cellular made for a very interactive display, with seemingly hundreds of staff on hand to individually guide you through how to experience and enjoy the new features.

“Canon, on the other hand, had regular guest speakers, who were industry experts, taking audiences through their favourite features, and how and when to use them. Very different tactics from these two industry giants and both effective for different reasons.

“CES is an event where you can spend days on end, seeing something new throughout the day and a must-see for everyone in our industry.

“I’d like to thank everyone at Wares again for the incredible honour of winning the Young Retailer of the Year award in 2012, and the fantastic prizes that go along with the title.”