ROLLING BACK THE YEARS TO FEBRUARY 2004 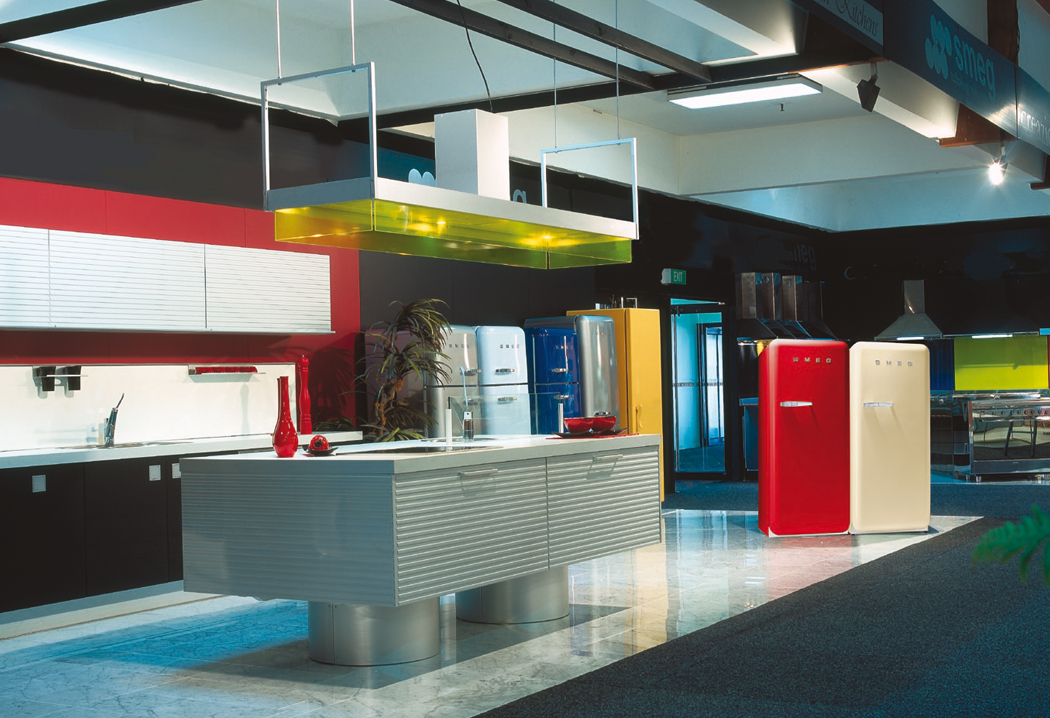 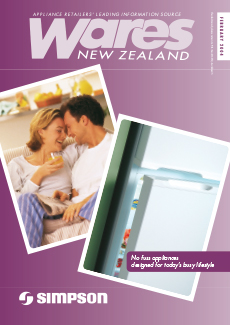 During the half-time show at the NFL Super Bowl final on 1 February 2004, Janet Jackson had a “wardrobe malfunction”, baring part of herself not only the massive stadium crowd but also a reported TV audience of 140 million viewers. That’s what you call exposure!

That same month, New Zealand celebrated the fact that the movie Lord of the Rings: The Return of the King won 11 Academy Awards and in cricket the Black Caps won four of the five ODIs against South Africa.

What’s a margin? – Simpson had the front cover of Wares as well as a DPS just inside to promote “a whole new line-up of no-fuss dishwashers, fridges and washing machines”.

The Editorial lamented the pre and post-Christmas discount season and consequent low margins, citing a no-brand DVD player at $79 as an example. That’s around $105 these days. Take a look at your own shelves and figure the technology you can buy for $105 in 2019 – still at bugger-all margin of course…

Gotta get those microwave ovens – Wares 15 years ago featured plenty of ads for microwave ovens but one stood out from the crowd for me. Anyone remember the LG MD2642KT 26 litre model? It was the one that actually did make the breakfast?

To see if this product took off, I recently caught up with Rob Morris, former Sales & Marketing Manager for LM Rankine Trading, which of course had the LG agency until 2007, having developed the brand from its Goldstar roots.

Rob, now Senior Account Executive at LG, says that particular model wasn’t around for too long, although the range itself was very successful.

“In fact,” he tells me, “I still have the MC805GLR Convection model which was in that same ad, in my kitchen today.”

Now we are five – By 2004, Breville New Zealand (trading as HWI) was celebrating its five year anniversary. In our pages, MD Brett O’Neill recalled a discussion he had with Joe Hersch, Managing Director of Breville in Australia in October 1998. “We shared a vision for Breville to be the market leading brand in this country,” he said, “and for the company to have its own operation, selling direct to retailers.”

HWI New Zealand was reported to be the leading distributor of portable appliances and Breville the market leading brand. The company employed 20 staff and supplied over 650,000 appliances to our marketplace. The Kambrook brand had been added in July 2000 and a year later the group was also appointed as distributor of Philips personal care.

With this move, Mark Gilbert moved across from Philips as Sales & Marketing Manager. Mark now owns the National Advanced Driving School (www.nads.net.nz) and stays active. In fact he and his son Stephen (an engineer at F&P Healthcare), both completed last year’s ASB Auckland Half Marathon.

What the Smeg? – 15 years ago, Appliance Network had just successfully negotiated the exclusive rights to retail the Smeg brand in New Zealand and GM Warren Brewin announced that the brand would be promoted through both Appnet’s Betta Electrical and Kitchen Things chains, with the latter focusing on the upper end models.

“Exclusive brands can be an important part of the business mix and we are absolutely thrilled that after many months of negotiation, we have come to this agreement with the Applico Group,” he said at the time.

These days, of course, along with Applico Group which distributes Smeg, Kitchen Things is part of the Jones Family Business.

Warren is now CEO of Lifestyle Retail Group in the equine industry but he recently added a new string to his bow, as a published author.

His book, called The Truth Is What You Believe, has been released by Balboa Press and you can check it out at www.warrenbrewin.com or buy direct from Amazon.

When I asked him recently what possessed him to write a book, he replied: “I’m not sure, but it’s like ideas sometimes come out of nowhere. However, once I had a title and the idea, I decided to explore it from a few different perspectives, being religion, sport, business and relationships.”

Warren believes strongly, that “there is a strength in the Truth which defeats the construction of fallacy for financial gain or power.” 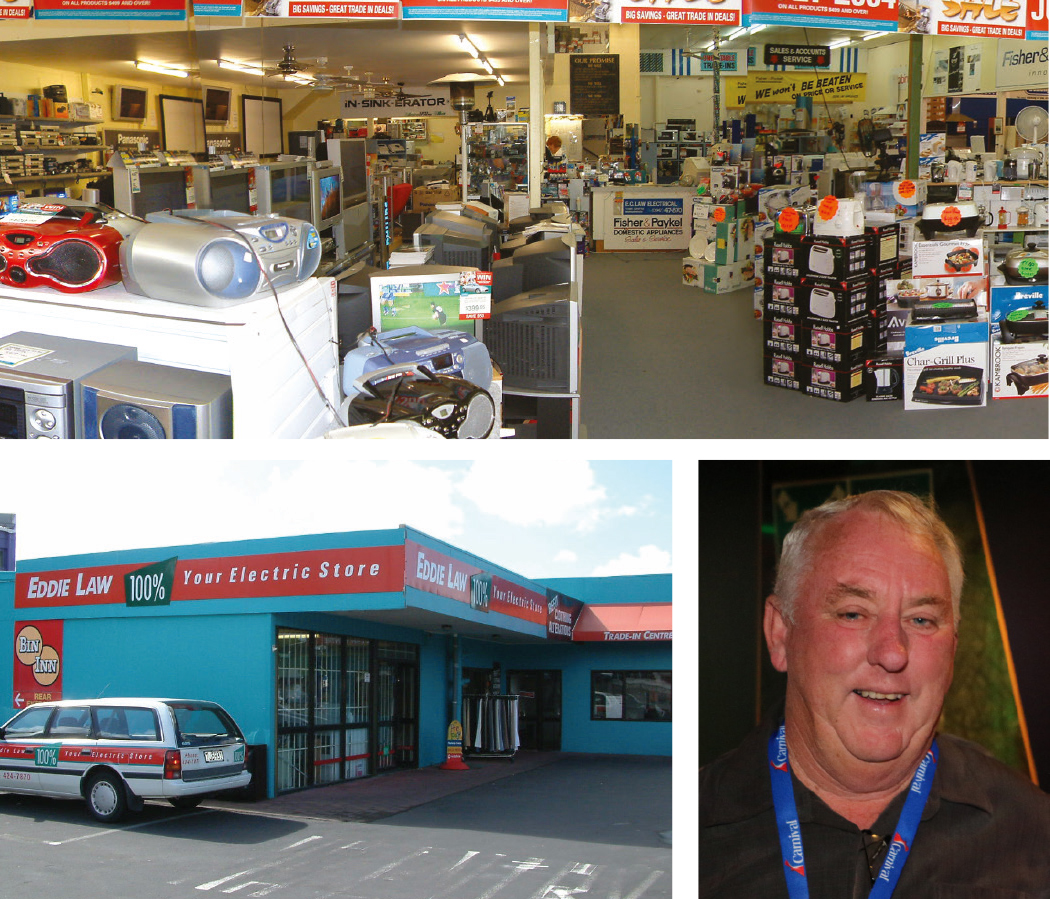 1OO% Eddie – JVC’s Retailer of the Month was Eddie Law 1OO% Your Electric Store. Eddie Law’s business was described as being “as local as it gets” with appliance shops in Orewa and Whangaparoa, a bed shop and a service company.

After completing a service apprenticeship with Parker Electrical way back in January 1971, Eddie had gone with the winds of change to build a substantial empire out on the Hibiscus Coast and, after different shops, different product mixes and different buying groups, was a staunch, proud member of the 1OO% team.

Eddie himself fronted the 18-person business but was quick to heap praise on his two experienced shop managers, Judy Christie at Orewa and Gary Mason at Whangaparoa. He reckoned that the older Coast customers knew they could trust him and the younger ones were learning fast.

Sadly, this iconic independent business is no more. The Orewa store shut around five years ago and the doors of the Whangaparaoa flagship closed for the last time on Christmas Eve just past.

With Judy and Gary already retired to Ashburton, Eddie’s called it quits, saying there was a variety of reasons are behind the “gut-wrenching” decision to shut up shop.

The cold facts are that it’s just too hard to make a profit these days, he said late last year: “The Coast Plaza, where we live is a shadow of its former self. The big box movers have driven prices so low and rising costs against reduced margins don’t add up.

Eddie has done pretty well out of the appliance industry thanks to hard work, great customer service, community sponsorships and long-serving staff but his mates have been quick to acknowledge the significant contributions he also made along the way on a personal level.

Eddie may well be fishing as you read this.

At the same time, it was revealed that the New Zealand operation was moving from Wellington to Auckland and that once that had bedded in and a new GM had been found, John would relocate to Melbourne.

In December last year, John joined Nilfisk Australia with a Senior Business Development Management role in the Nilfisk Professional Division (Commercial and Industrial products) based in Melbourne. Prior to that he completed a three-year tenure as head of the Camfil Air filter business in Australia and NZ.

The big news at Sony in early 2004 was that a Kiwi would head up the New Zealand business for the first time. Martin McManus the new Director of Sony New Zealand, having already been with the company for 10 years, firstly as a Product Manager and latterly as General Manager Sales & Marketing.

At Monaco Corporation, Carol Glidden was appointed to the position of Product Manager responsible for EWT, Dimplex and GM air conditioning. Carol (Carol Brown these days), is now a Senior Account Executive at Microsoft.