LIFE IS A RACE!

The first in our 2019 “Where are they Now” series is Geoff Lawes, who talks about his three decades in our industry. 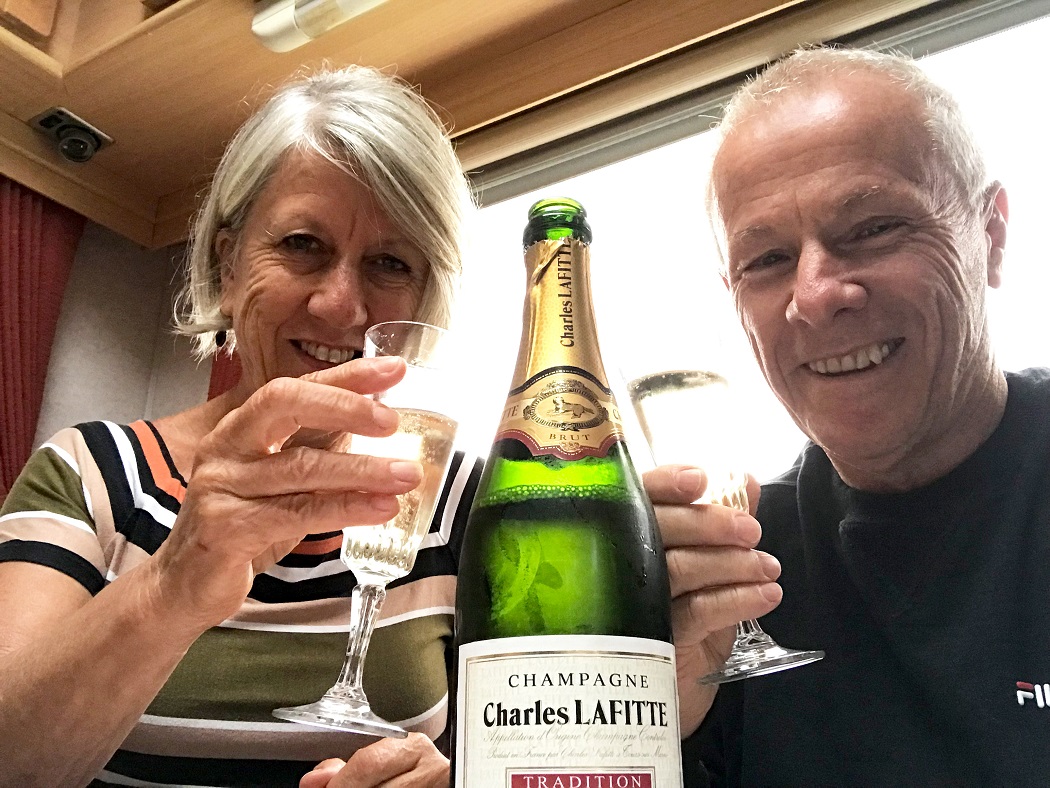 Geoff Lawes (seen above with wife Lois) started out working as a telecoms technician trainee with Civil Aviation in 1964.

He was based in Wellington at the Kilbirnie workshops and you know he was an early achiever when you see his 1967 graduation certificate number is 12.

The following year he transferred to Christchurch International Airport as an Airport Technician, one of the team responsible for the “point-to-point” communications system between airports and it was there that he met Lois Nicholl.

BELOW: A side business circa 1972, was Kiddie Kars, seen here in Wanganui. 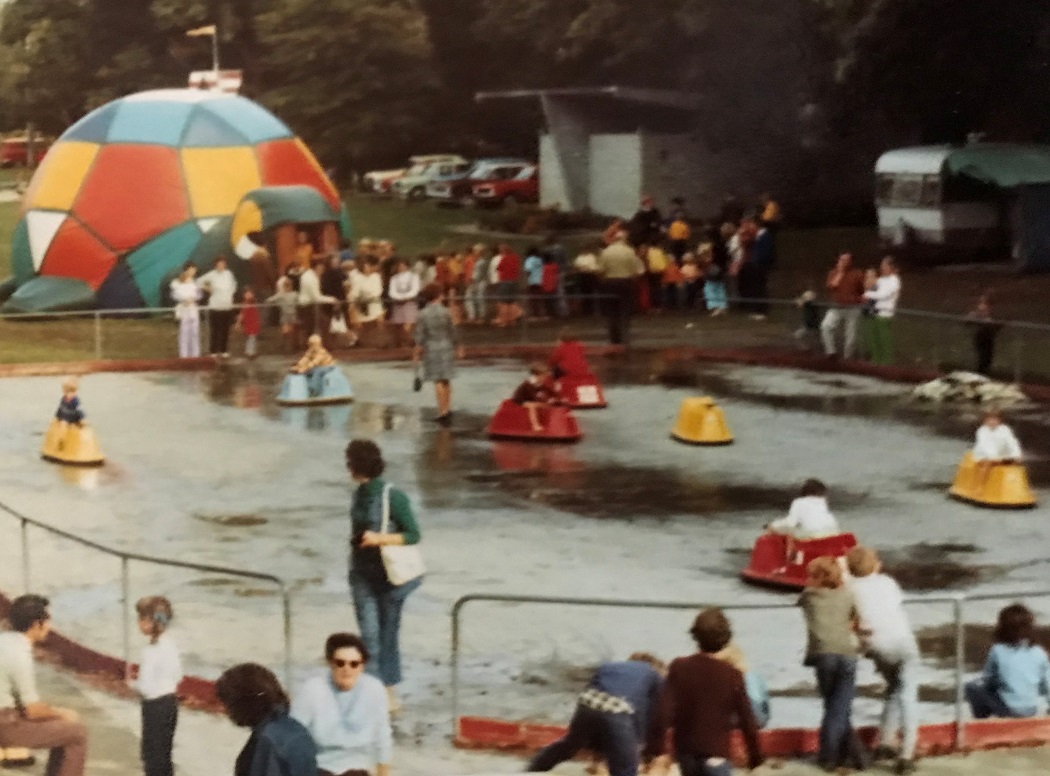 Geoff had long harboured a desire to get into sales so, after the wedding, he joined David J Reid (these days David Reid Electronics) as a technical salesman, before being headhunted by electrical engineers and contractors Turnbull & Jones, who were seeking to re-energise their Christchurch operation.

In 1971 Turnbull & Jones moved Geoff to Wellington as National Controller of Electronics, working alongside Marketing Manager, Max McGerty, who had previously been Branch Manager for Philips in Christchurch. (Incidentally, Max’s career would later take him to Fisher & Paykel Customer Service.)

By this time Geoff had also established a side interest, manufacturing and operating battery-powered Kiddie Kars and in 1972 he decided to concentrate full time developing this business.

Geoff had sites in Wanganui, Taupo, Napier and New Brighton plus Johnsonville and Cuba Mall in Wellington but, being a weekend and holiday orientated business “it was never going to set the world alight,” he says today.

So, with colour TV taking off around the 1974 Commonwealth Games, Geoff decided to go back to his technical roots with a part-time job at Chaney Electrical in Porirua and, studying at Wellington Polytechnic, he became proficient in CTV servicing.

“I was working with Johnny Ranchhod at the time and after a year or so we took over Chaney’s service department, renaming it Teleart Electronics,” says Geoff. “We went gangbusters through to 1978.”

That year, however, Geoff decided it was time to move on.

Geoff reckons that job was the best he ever had but it wasn’t enough. He wanted to be his own boss and the opportunity came at the end of a sales run through the South Island.

“It was 1981 and my last port of call was Nelson so I dropped in to visit an old client from my David Reid days, Rob Fairbairn, who I hadn’t seen for 10 years.”

Rob Fairbairn had a retail store in Richmond plus a rental fleet of 170 TV sets and was interested in selling up, says Geoff.

“Long story short, Lois and I moved to Nelson, bought the business and called it Fairbairn Lawes.” 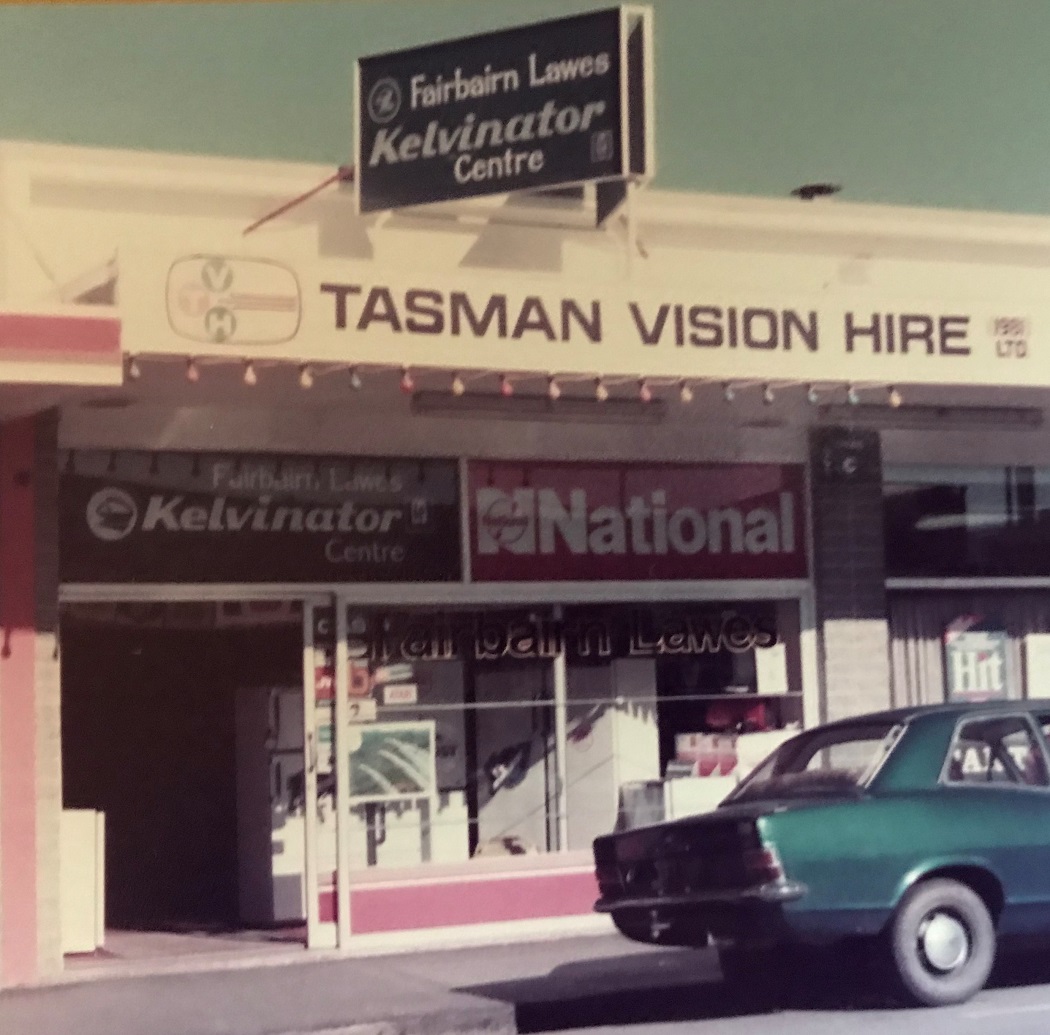 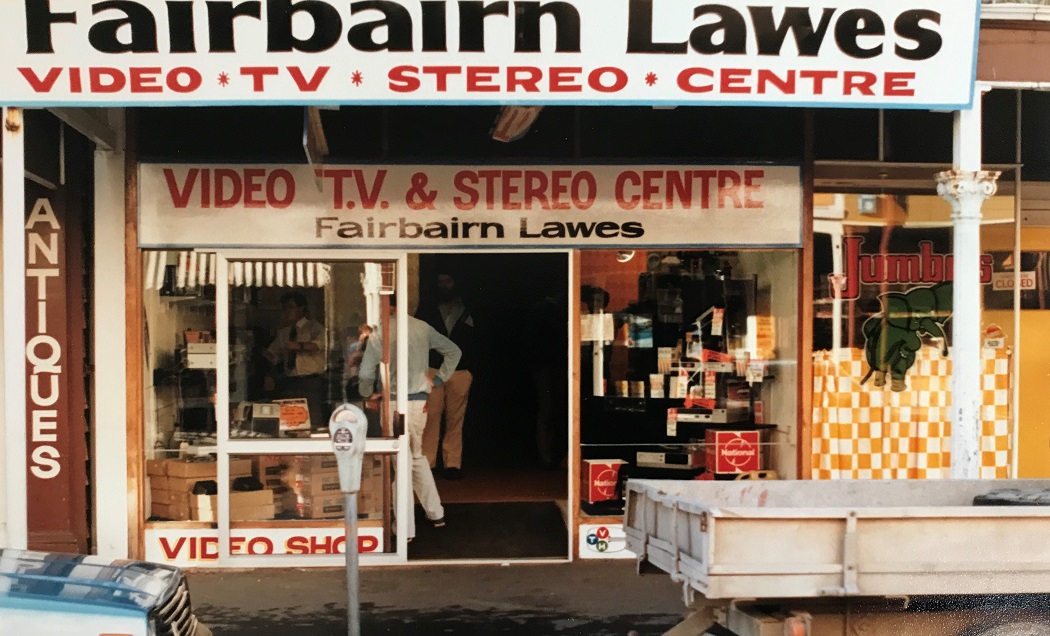 Never enough to go around

Johnny Ranchhod and Geoff would team up again in 1983, while Geoff was running Fairbairn Lawes.

With Colin Charles of Jenness Appliances they jointly owned Nimmo’s, the well-known Wellington electronics, appliance and music store on the corner of Willis and Bond Streets. After a couple of years, Johnny bought Colin and Geoff out.

Back then, demand well exceeded supply for Philips’ iconic K9 CTV, with Thorn and Sanyo providing day to day volumes and Geoff well remembers the phenomenal sales growth of colour TV in those heady days.

“The first month we sold 14 TVs, the second we doubled that number and in month three we sold 56 colour TV sets. It was fantastic!

To keep up with demand, Geoff would make trips across to Wellington to buy second-hand colour TV and they expanded the Fairbairn Lawes rental fleet to over 350 units, converting the old black & whites to colour along the way.

The rental business was eventually sold to Group Rentals, a deal that was done with Dave van Weede who, like Max McGerty, was ex-Philips.

BELOW: Geoff was also joint owner of Nimmo’s in Wellington by 1983. 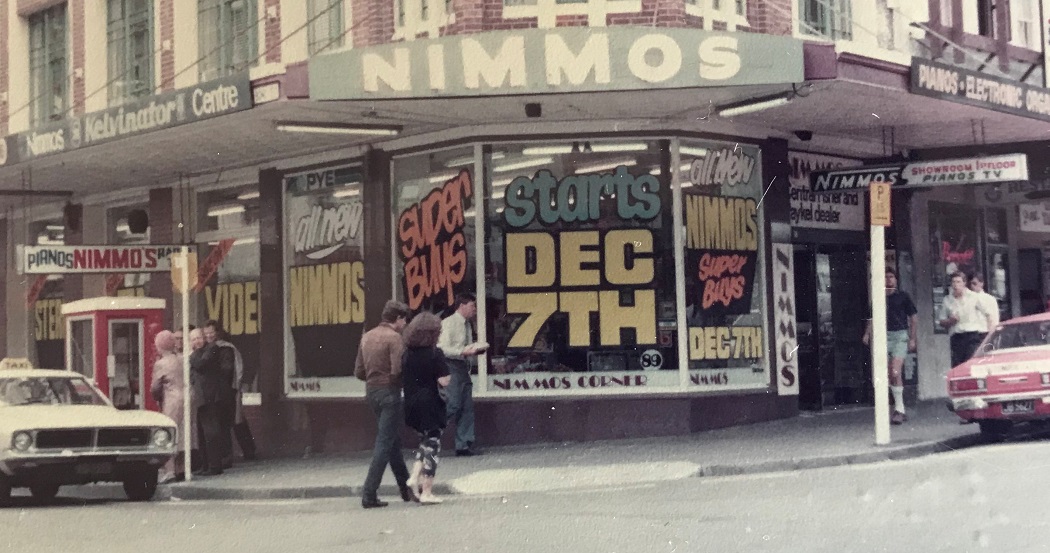 Geoff took over Kelvinator House in 1983, becoming an F&P dealer and in 1984 bought Spicers to complete a modest empire comprising two stores in Richmond, one in Nelson and one in Motueka plus a whiteware service company and a second-hand outlet for trade-ins.

That same year, Noel and Dawn Gillespie came on board as 30% partners and the good times continued to roll - until the financial crisis of 1987.

Geoff and Lois had invested much in the share market during the boom times and these funds virtually disappeared when the crash hit.

Desperate times meant desperate measures, so the Nelson store was sold to Tasman Energy while Motueka was bought by Noel, leaving Geoff with a single store on Queen Street, Richmond.

Geoff recalls these tough times: “We battened down the hatches but, as the market recovered, so did we.”

However, with Noel Leeming pulling out of Richmond and Smiths City going into receivership, Geoff saw very good trading from 1989 until the store was sold to Tasman Energy in 1993.

Actually, Geoff had tried to buy Tasman Energy’s retail arm but they countered and made him an offer instead, so he took their money and managed the business for Tasman for another three years, after which Geoff says he’d had enough.

BELOW: On the Electronic Appliance Guild Committee, 1984 (Geoff at the back, far right). 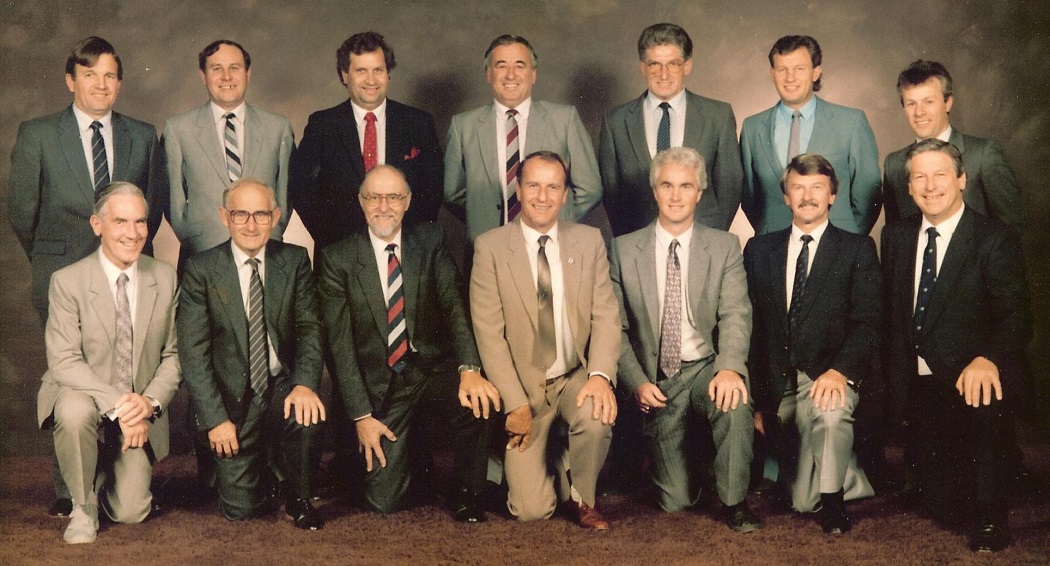 BELOW: 1987 and the new Richmond store – Fairbairn Lawes Appliance City. 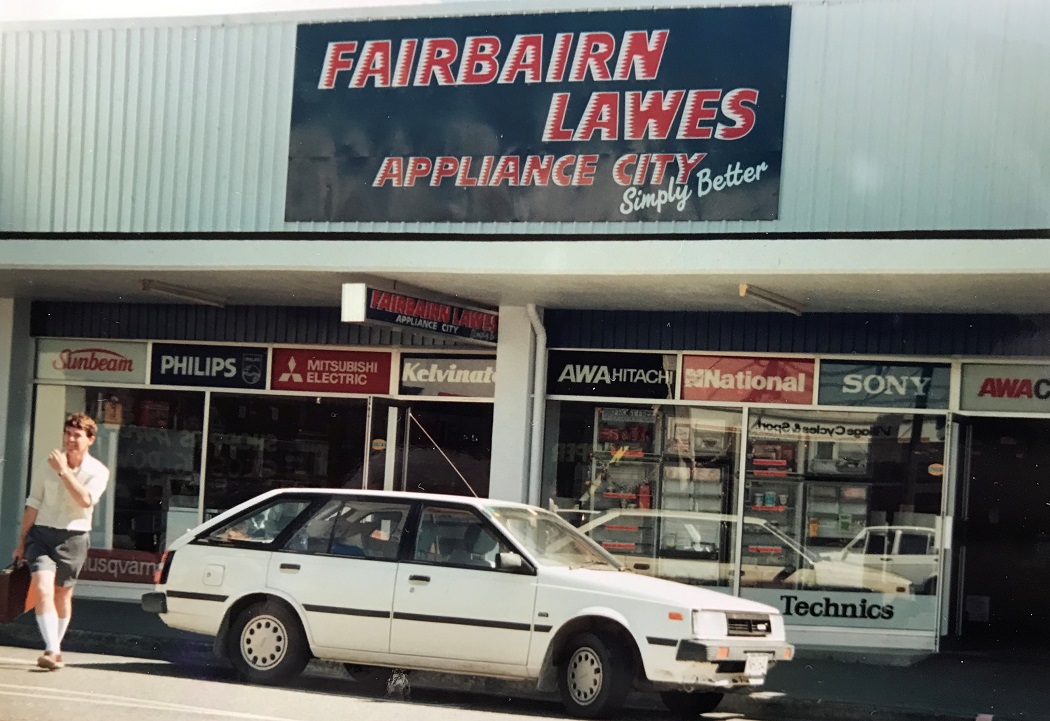 Off to Europe (with Elsie!)

So, in 1996 or so, Geoff and Lois took themselves off to Europe. They bought a motor home and spent nearly six months touring, catching the bug so badly that to this day the European adventure is a regular happening.

Returning home, Geoff consulted to Brent Ferguson Motors for three months then ran the business for three years before briefly joining Origin Pacific Airways as Marketing Manager and then spending a year working with his son Gareth in the tourism industry.

In 1998 Geoff became an Independent Director at Waimea Finance, which was locally owned by Brent and Bill Ferguson and five years later, through a series of circumstances and acquisitions he was a shareholder in Fico Finance in partnership with Brent and others.

This relationship continues today. Geoff was CEO until retiring in 2015 at age 68 but remains a Director as well as keeping his hand in as a self-taught accountant looking after the interests of a group of clients as well as his own property investments.

So nowadays, “Elsie” the motor home gets trundled out of her South England storage for three months each year as Geoff and Lois continue their love affair with Europe.

In 2019 however there’ll be something special about the trip – this year it’s their Golden Wedding anniversary.

BELOW: Geoff and Lois in the South of France last year. 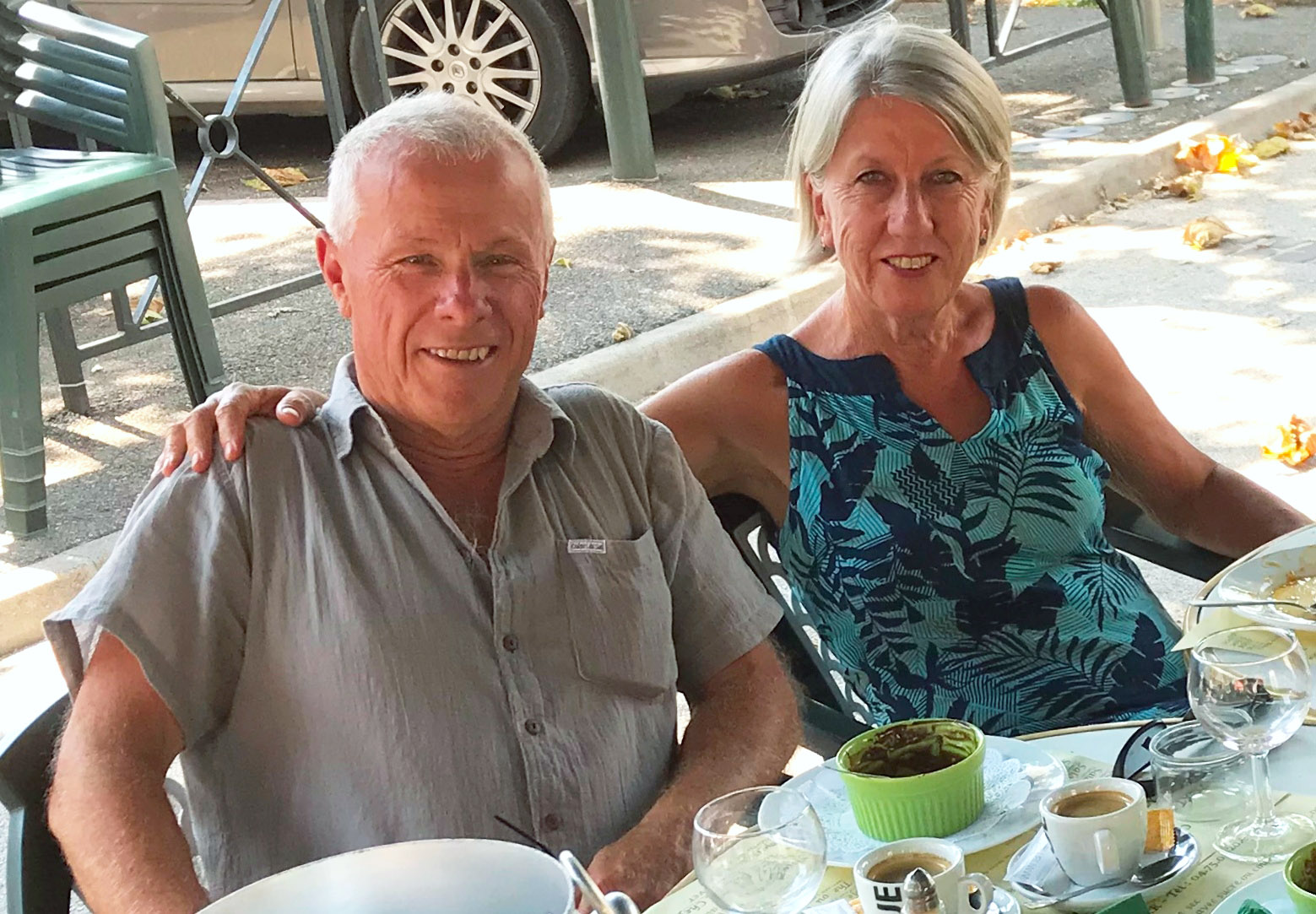 It was great fun catching up with an old mate who, on his exuberance and love of life has this to say: “Life’s a race you know.

“There are lots of things to do and you only have a certain amount of time.

“The catch is, you don’t know how much time you’ve got!”

Geoff Lawes was a Fapay member and became an identified 100% dealer on the inception of Appliance Connexion.

He also served as a Guild board member for 12 years and was made a Life Member when he left the industry.

Over to Geoff Lawes for the last word: “My time in the industry totaled 31 years and it was a thoroughly enjoyable part of my life.

“I met many wonderful people and had lots of fun times.

“Through Wares I am able to keep in touch with what happened during those years and since.

“Thank you Wares, for the opportunity to tell my story.

“Remember, life's a race, so I better get on with it!”

Browse through all the episodes in our "Where are they now?" series here.