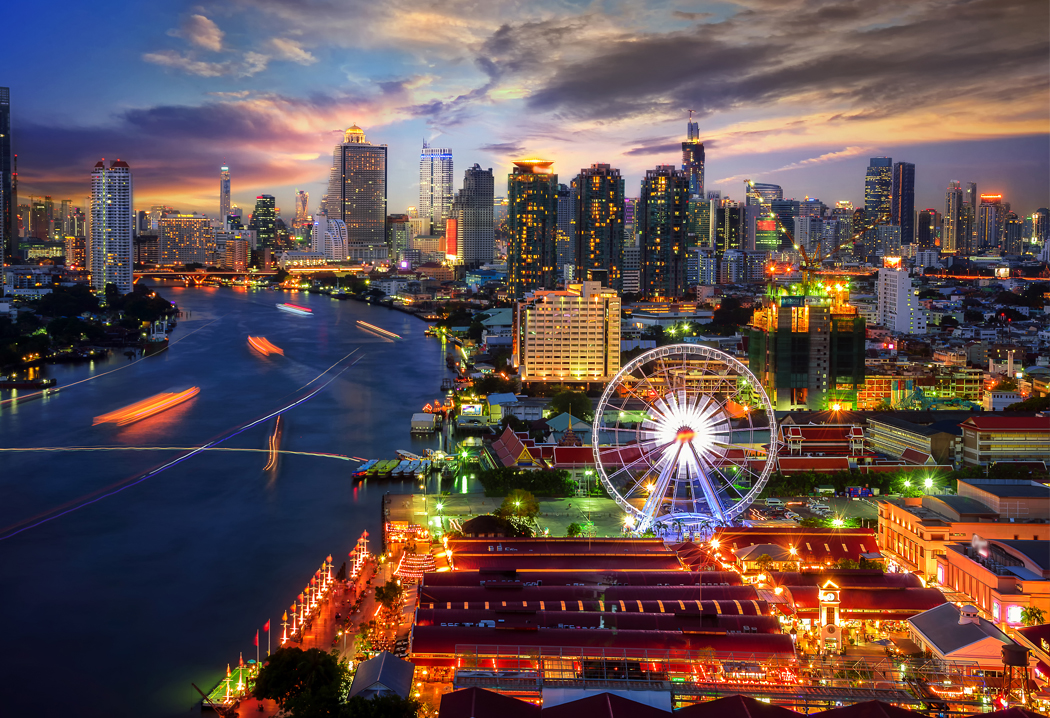 Of the exotic location, says Appliance Connexion Group General Manager, Nikki Shutkowski: “We’re making tremendous progress and are experiencing good growth, and have plans to maintain that momentum,” adding: “We’re taking members outside their comfort zone and are exposing them to new ideas and concepts.”

Some of these new ideas were provided by the study tour on the last day, of which further details follow later.

Other ideas were the fruit of the high level of dialogue seen between members, and members and suppliers – all of whom seemed to make the most of the opportunity of having these important independent retailers in one location.

“A massive 97.4% of our buying power was present and the suppliers really took advantage of that amazing opportunity to participate in this year’s annual event” says Nikki. “Everybody was there to do a job – as well as enjoy the experience.”

Having left Auckland Thursday arvo, I arrived Friday night, Thai time, just in time for Electrolux to host welcome cocktails and dinner and still be fit for anything the following day… 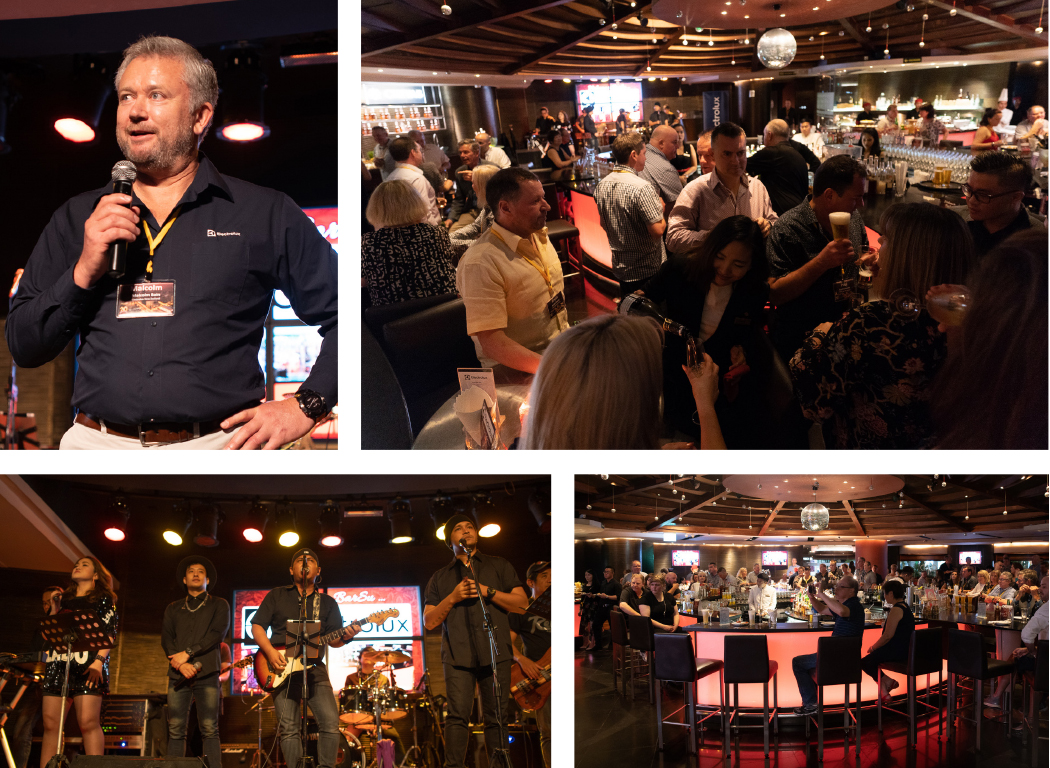 After a hearty Panasonic breakfast and morning tea, Saturday morning saw proceedings kick off, led by Nikki Shutkowski and Master of Ceremonies Simon Dallow who kept the speakers honest and moved proceedings along.

Nikki opened the conference by disclosing the thread that would resonate throughout the event – DISRUPTION!

Among all the big name retail closures and Chapter 11s in recent months, said Nikki, “amongst all this disruption, there remain opportunities for those who act!”

“Our future success is about remaining relevant, viable and exceeding customer expectations – which never stand still.”

In this respect the GGM reported on progress with the new 1OO% brand mark which continues to roll out, the new beds & bedding category which has now gone into almost half the membership, the ongoing social media programme and investment in IT and the common retail platform, which all members are being encouraged to support and adopt.

Our first keynote speaker was Andrew Bryant (www.andrewbryant.global), who was sponsored by Electrolux.

In a high-energy session, Andrew talked to self-leadership – that is, “how to become a more successful, efficient and effective leader from the inside out”. 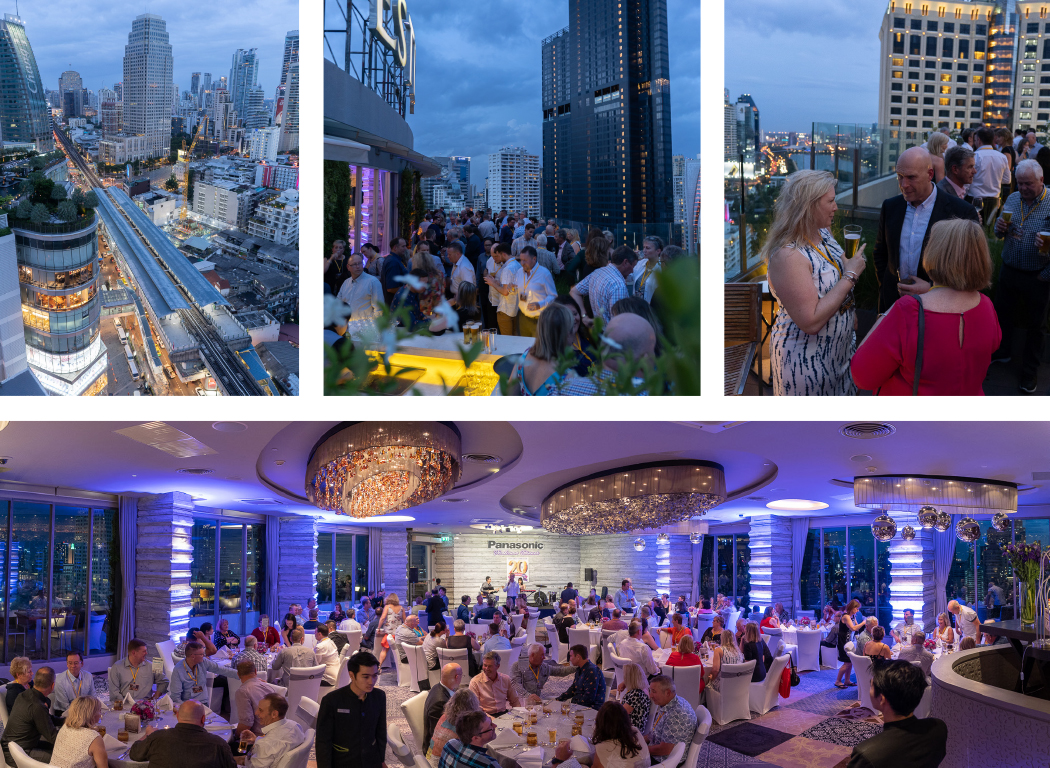 Lots of food for thought…

Lunch was followed by the always interesting member presentations – three out of four which this year addressed succession planning. Both the food and the following food for thought were thanks to Beko AU & NZ.

First up was Paul Edwards of 1OO% Barrell’s Extreme in Whangarei, whose approach to retailing can be summed up thus:

“Never forget your local market and be prepared to keep changing – our point of difference has been about being local and knowing our customers.”

In other words, just when you think you’ve finished changing, there’s more change ahead…

Next, John Heginbotham, retiring former major shareholder of the 1OO% Newbold’s stores, talked in-depth and with no holds barred about his own succession process.

“Your attitude determines your altitude… What’s your business worth?” he asked.

His advice to independent retailers in rural towns is to find your successor as soon as possible – “it’s important to let go and let someone take it on”, as indeed John has done with his son, Mark.

“Is your business ready to be passed on?” he asked in closing. “Make it one of your KPIs.”

We then moved from the North to the South Island with Tony Ellery of 1OO% Ellery’s in Greymouth.

Tony regaled us with charming anecdotes of the third generation family business that was started by his grandfather Barney and father Neil – right at the beginning of the local appliance industry.

Another strong, proudly local retailer, Tony Ellery advised members to take a lead from some of Bangkok's “service providers” and always offer just that little bit more than the customer expects…

Equally local and equally family-based is 1OO% Van Dyks in Putaruru and part of Henry Van Dyk’s outlook on succession planning is to “have a purpose in business”.

You should also surround yourself with the best people (who may end up as your successors), “measure everything” and keep a strong grasp of the dollars & cents of the business against which to measure your ROI.

Being “fit” for business…

The content delivered by the next keynote speaker, Tim Bean (www.iopm.co.uk), whose theme of “fit for business”, was a reality check for many.

Health & wellbeing is Tim’s speciality and his mantra is that even small daily changes to your lifestyle and health position, mean much better health in the long run.

Treat your medical data as just another set of books to balance, he says, and of course the same applies to business…

“Where the mind goes, the body follows – you cannot have a lean body and a fat head…

“Getting yourself in better shape is better for business, better for life and better for your family” – which is precisely the reason many people (including those present) start their own businesses in the first place…

Our first full day in Bangkok was capped off thanks again to Panasonic who hosted us to cocktails and dinner atop the Westin Grande Sukhumvit’s Altitude restaurant, many floors above the bustling, busy oriental metropolis.

The views were spectacular, increasingly so as the sun set across the bustling city skyline.

Day two (Sunday) continued the theme of disruption – defined as “disturbance or problems that interrupt an event, activity, or process”.

Appliance Connexion Deputy Chair, Mark Gilbert, is closely connected with the automotive industry which itself has been busy addressing disruption for years – starting with cars replacing the horse-drawn carriage in as little as 13 years.

The proliferation of mobile phones has been equally exponential and equally hard to predict accurately.

Still, said Mark, “what looks like a threat may also be an opportunity” and it was interesting in this respect to talk with Alistair Lilley, who’s now quietly selling e-vehicles…

Bryce Purdy, General Manager Merchandising & Marketing, followed up with further examples of prototypical disruptors – Uber, Netflix, Amazon – and none of these behemoths existed when Appliance Connexion was formed…

Still, he added: “The New Zealand market is a magnet for disruptors”, so watch out!

Having said this, Bryce turned to a positive – that although 80% of consumers currently use a digital device to research appliances, 96% of appliance sales are currently done at bricks & mortar. 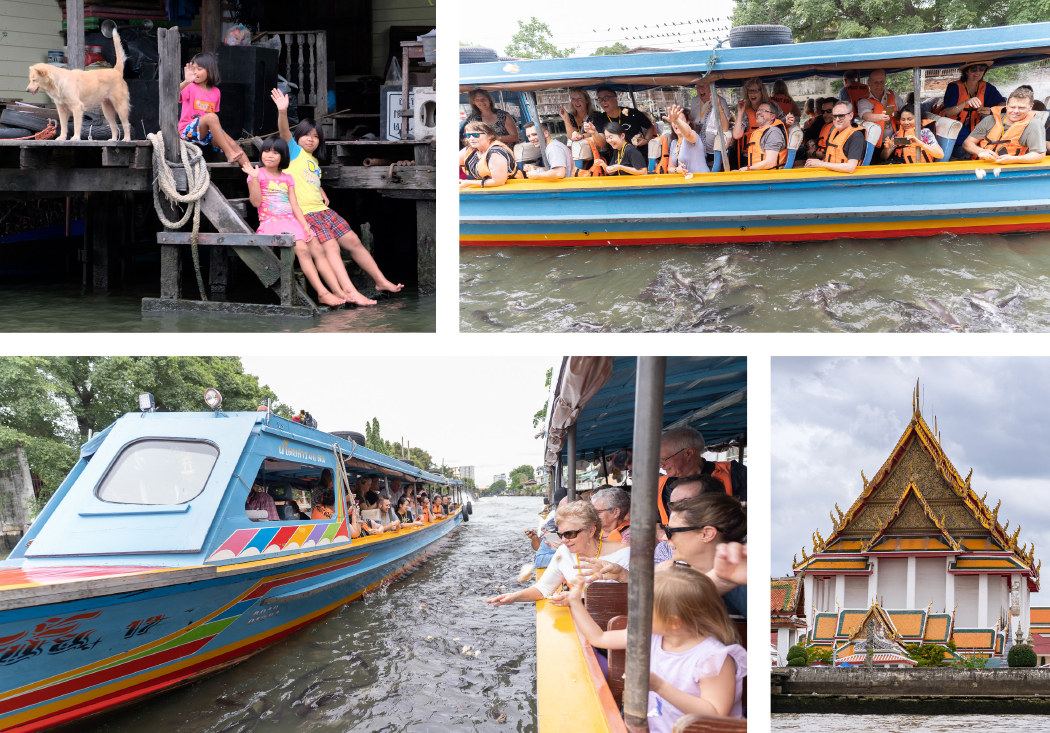 Leadership isn’t what you think…

David is a mountaineer who led the first Singaporean Mount Everest expedition in 1998. Injured on the summit push, he did not make it to the top himself though two other team members succeeded.

On his return, he was stricken with a rare nerve disorder which left him paralysed from the eyes down. He spent six months in hospital, finally emerging still partially disabled in both legs.

Despite this handicap, David has led more than 15 expeditions in the last 20-some years.

His keynote wasn’t really about mountaineering, but about leading teams and inspiring people to work with you as opposed to for you…

His conclusion? Find the right team, stick together and there is no telling how high you can climb… 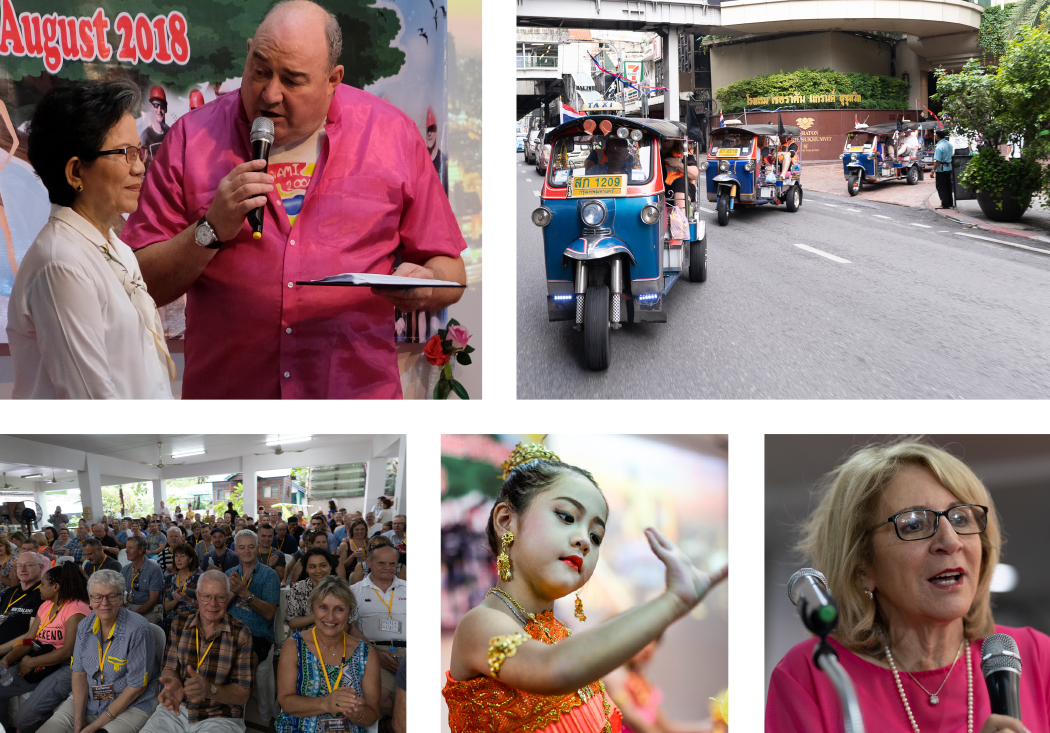 Getting out and about…

After lunch, BSH Home Appliances took us for a big boats tour of the Chao Phraya River that runs through Bangkok, and along some of the many canals (khlongs) that meander through the city.

This exposed delegates to a true cross section of the contrasts that are so evident throughout Bangkok, from a very few cool Modernist houses and the many impeccable temples to more rickety dwellings…

To get a real flavour of the range of sights seen on the cruise of the waterways, check out the Wares Facebook page and website for photos that tell so much more than a few words…

Thanks to The Comfort Group (SleepMaker & Serta), the boats dropped us off at Asiatique. This former colonial trading post on the river is now a veritable open-air mall, an uber-busy hub of food, fashion and boutique retail that’s open until late – the perfect place for delegates to enjoy local culinary fare and libations. 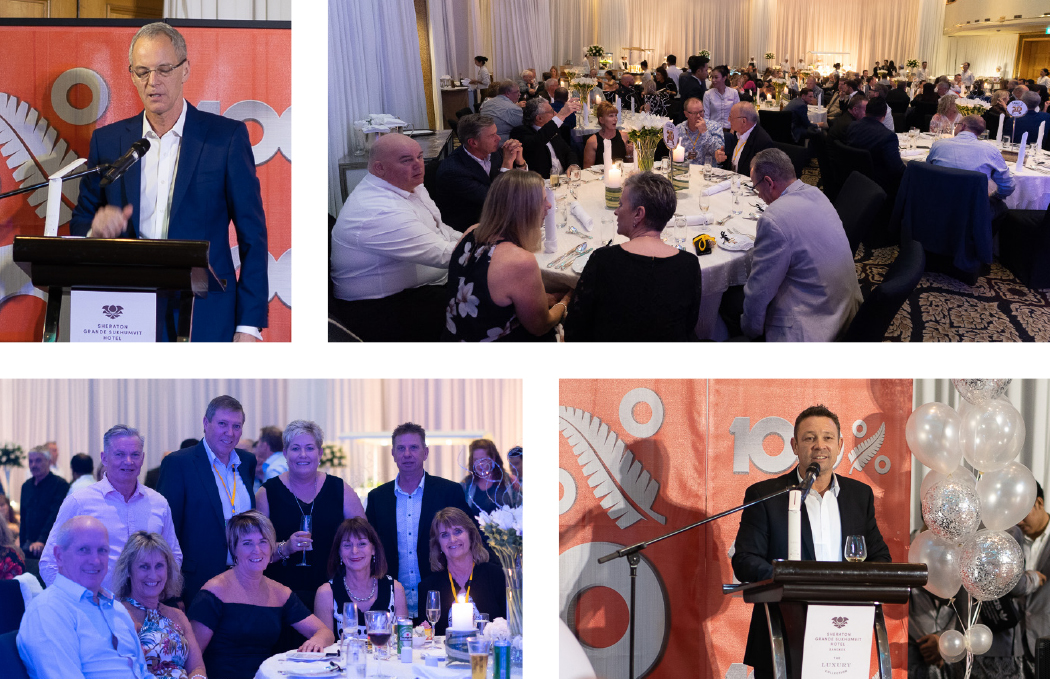 Monday was officially “Fisher & Paykel Appreciation Day” and a hectic convoy of 65 loud and colourful tuk tuks took us off the beaten track into the slum district of Khlong Toei.

At the heart of this underprivileged area, our destination was the Duang Prateep Foundation (www.dpf.or.th/en/), led by Prathip Uengsongtham, who’s also known as Khru Prateep (“Teacher Prateep”).

The Foundation has for some years been supported by the Hands Across the Water charity, Narta and Fisher & Paykel, and indeed Narta’s Kay Spencer and ACL Chair Peter Drummond spoke to the great work that the Foundation has achieved since the late 1970s. On behalf of the membership, Appliance Connexion, and F&P’s Mark Baillie, presented Khru Prateep with a further token of support.

After enjoying the talents of some of the Foundation’s fine young protégés and a fashion show, we set off again on foot through the village of Khlong Toei, passing as we went “The House that Fisher & Paykel built”.

Also related to the Hands Across the Water programme, this worthy project from a couple of years back involved F&P employees and Narta Kiwi retailers striving to rebuild the dilapidated house occupied by local Mr Muan and family and provide them with a fit place to live.

Members and key partners were recognised, a cake was cut and the band played on…WOW!! What a night, and a great acknowledgement to the group’s success. 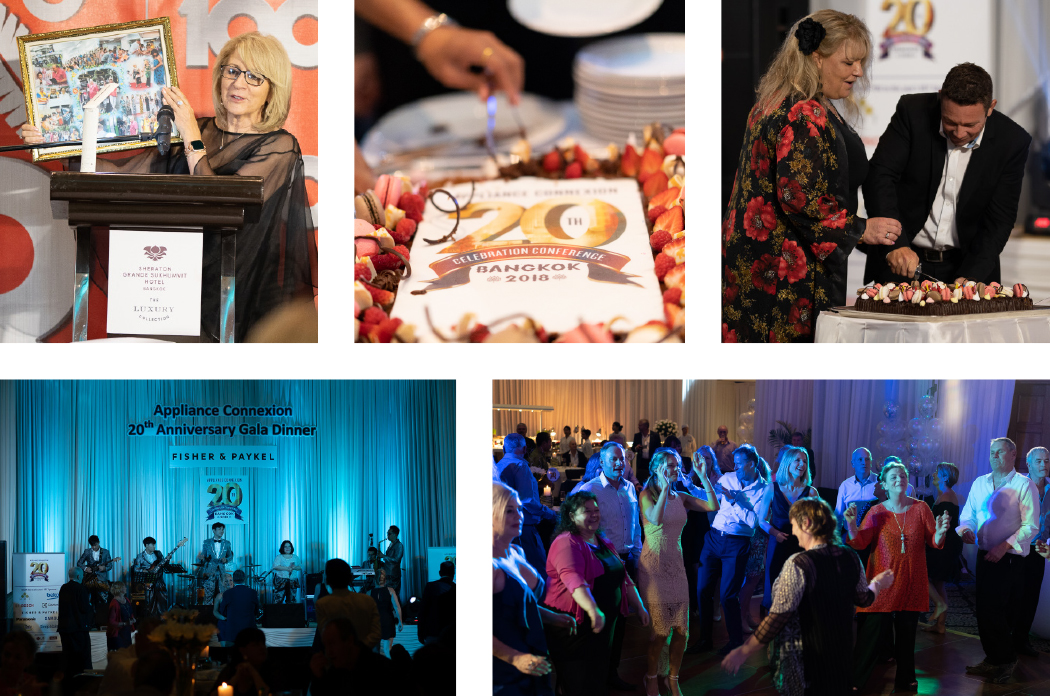 Tuesday morning, after our Beko breakfast, we boarded the super-convenient Skytrain that runs above Bangkok’s congested streets for the Beko Retail Study Tour.

The destination was the fabulous upmarket Siam Paragon Shopping Mall in the heart of Bangkok that somehow manages to pack 250+ top retail stores into its half million or so square metres.

You can buy almost anything at luxurious Siam Paragon, from appliances to a Ferrari to Jimmy Choo shoes, visit the aquarium or catch a movie at the Cineplex…

Summing up the four days in Bangkok, Henry Van Dyk potentially expresses the view of most of those who were in Bangkok in August when he says: “I thought conference was excellent. It was very well planned and run and there was a very good cross-section of content.

“I think it’s really great that we had an array of international guest speakers who covered topics that we could relate back into our business.

“It was also great hearing the other members’ points of view, what works well in their businesses and getting insight into their backgrounds and business practices and how they look after their customers.”

“We believe there is a tremendous sense of engagement and unity within the group. Our members are really feeling ‘the family’ as we call it!”

“We’ve been quite ballsy on some of the calls that have been made but we’ve also had many fantastic successes.

“We’ve certainly had some challenges along the way, but the membership has risen to these challenges, and are looking forward to tackling the opportunities ‘the family’ can create together in the future!”