IN THE NEWS: NEW PRODUCTS FOR EARS AND EYES

New wireless cans from Beats, Canon's new lens duo, retailers both hot and cold and a new Cyber-shot from Sony.

Ears may like, but eyes will pop - The POP Collection wireless headphones, Solo3 Wireless and Powerbeats3 Wireless are the latest from Beats by Dr Dre. Influenced by the pop art movement, the collection "was designed for those who capture its lighthearted energy and creative spirit". Both headphones come in 4-dimensional colour themes: POP Violet, POP Indigo, POP Magenta and POP Blue. Out this month.

Canon updates popular lenses - Yesterday Canon New Zealand announced an upgrade to two of its most popular L-series lenses:  the EF 70-200mm f/4L IS II USM and EF 70-200mm f/2.8L IS III USM. "The 70-200mm lens has long been a must-have lens for photographers from enthusiasts to professionals thanks to the versatility of being able to easily change image composition by switching from standard to telephoto zoom," says Canon. 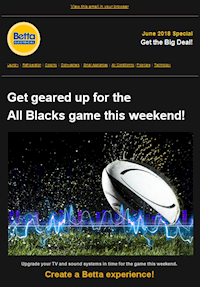 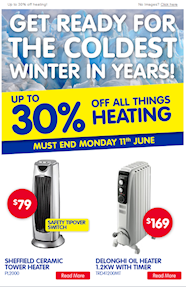 Indie retailers both hot and cold - The "hot" was Betta Electrical's e-news promo this week, betting on interest in the All Blacks game against France this weekend to create demand. "Get geared up" exhorts the promotion, "Create a Betta experience"!

The "cold" was yesterday's Applianceplus email flier. "Are you ready for the coldest winter in years?" it asks, and follows up with a range of heater and dehumidifier solutions, not to mention an extended free freight offer for all products across the North Island.

As an aside we looked at the Metservice website today for a glimpse of the weather to come - "changeable" was the best we could read into what they said...

Sony's new Cyber-shot - Sony NZ yesterday revealed the latest in its popular Cyber-shot RX100 series of compact cameras, the RX100 VI, with its 24-200mm large aperture, high magnification Zeiss zoom lens with "world’s fastest AF speed". At the same time it announced a versatile compact new shooting grip, suited for the RX0 and RX100 series and ideal for vlogging, travel photography and self-portraits, or simply as a tripod.