Straining to look beyond the layers of fine detail, features & benefits, can we define the standout trends at IFA this year? Let’s have a go… Steve Bohling reports. 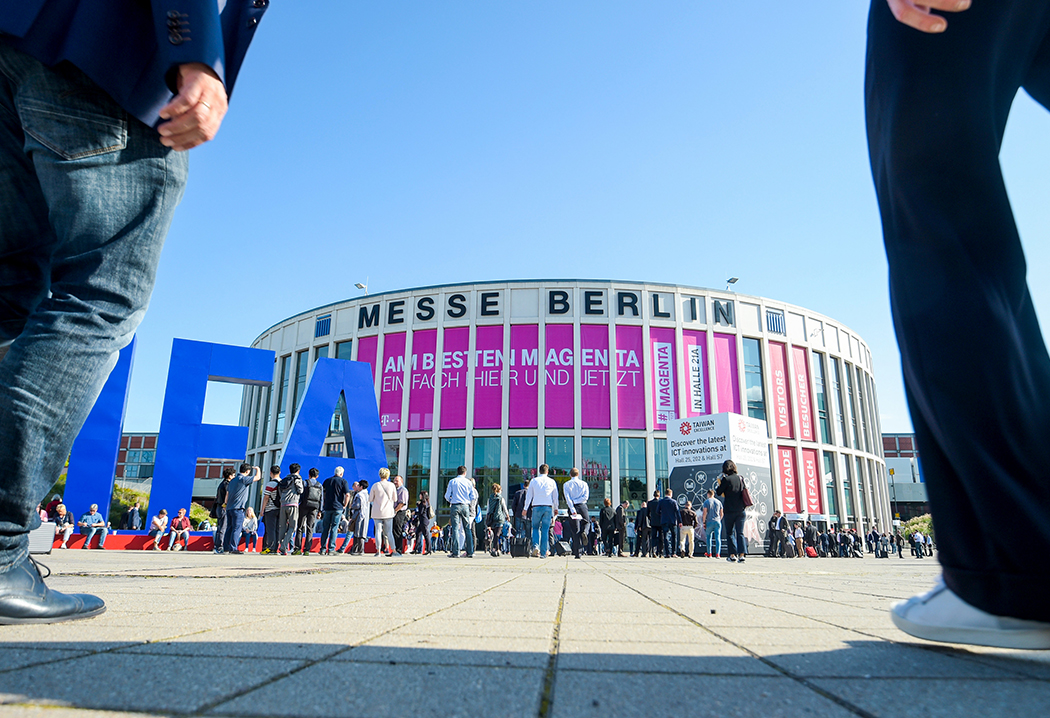 Having for the last couple of years feasted in person on the new gear on show at IFA, Wares didn’t travel to Berlin this September.

The internet however is a wonderful thing.

Plus, if you ask around those who were there, you can quite quickly gain a decent perspective that also offers a local bent on this massive annual fair.

This obviously ain’t the same as being there, but then again possibly only a dozen of our readers actually made the trip this year…

Many of you will have read over particularly the last half year that some pundits have been comparing the wearables market to Monty Python’s dead parrot.

After all, some of the first upmarket, upscale, wearables are still sitting, discounted and unsold, on the remnants shelves down here in New Zealand.

Plus, six months is an eternity in new technology so you could be forgiven for taking the negative outlook on wearables as gospel.

Add to this a certain sense of saturation around lower end fitness bands and you’d be forgiven for asking “where next?”.

However, unlike John Cleese’s “late” Norwegian Blue, the wearables category ain’t dead – it really has just been resting its eyes.

And, at IFA, smart watches were trending, with renewed vigour, more towards a fitness focus.

Take Fitbit – doyen of the fitness band – which debuted its first smartwatch in Berlin.

The Fitbit Ionic (1) is a proper flagship smartwatch but has been clearly designed, externally and in terms of its software, to appeal to the brand’s existing user base of active lifestylers.

The IFA launch also included the new Flyer wireless earphones while the Ionic also works with the brand’s existing Aria 2 smart scale, to help add value to a sale.

Then there’s Samsung, which rolled out its new, more petite Gear Sport at IFA (2), along with other active accessories, the Gear Fit 2 Pro fitness band and the Gear IconX 2018 wireless earbuds.

The new Gear Sport also has an app designed with Speedo to track swimming activities. Usefully, Gear Sport is waterproof, which can’t be said of all of its growing range of rivals.

Also launched at IFA was Garmin‘s Vivoactive 3 (3), which, like the two models above, runs the company‘s own OS. Also like its competitors, Garmin‘s watch runs apps, tracks workouts and offers contactless payments.

Of the other key wearables players, Apple however doesn’t do IFA, preferring to curate its own experiences.

So, the week after the Berlin show, came the debut of Apple Watch 3 (4).

Alongside more (and more accurate) fitness-related functions, Apple’s third wearable iteration brought with it GPS and the option of its own cellular connection, so you can stay connected while you’re pursuing your active lifestyle.

There were other debutants in the wearables space since IFA, many at the top end and bearing aspirational brands, with Google alone boasting there would be 20+ Android Wear models before Christmas.

So are wearables “late” as in done and dusted?

Not by a long chalk.

But, as a group, they have certainly been to the gym and emerged fitter and more active – all the better to try and tempt the millions of fitness band owners towards a broader functionality.

SMART SPEAKERS – TALK TO ME!

Over the last couple of years, the Berlin show has also been a showcase for better performing and better looking wireless loudspeakers.

This year, IFA was about connected loudspeakers which you can both listen to and talk to.

Loudspeakers through which you can question Alexa or Google Assistant or Siri about the weather, ask to turn the lights on, find the closest pizza parlour and actually order that Quattro Stagioni.

Some players chose to work with both Amazon and Google’s voice assistants.

Onkyo for example had a model for each (named P3 and G3 respectively), on top of a treat for connected audiophiles in the form of lossless multi-room playback from supporting streaming services.

Interestingly, Onkyo has chosen to present P3 as oval shaped while G3 has a rectangular form factor (5).

The Harman Kardon Allure only has ears for Alexa but it doubles as an ambient light that reacts to questions and the music being played.

Both work with Google Assistant and Sony’s offering at least should be here for Christmas.

Before IFA, it was announced that the popular Logitech UE Boom 2 and Megaboom would support Alexa on Android devices, as well as Google Assistant and Siri.

And now the multi-room audio maestros at Sonos have also crossed the gap between making sound and communicating with AI when they announced the Sonos One product (9), which is compatible with Google Assistant, Alexa and Siri. 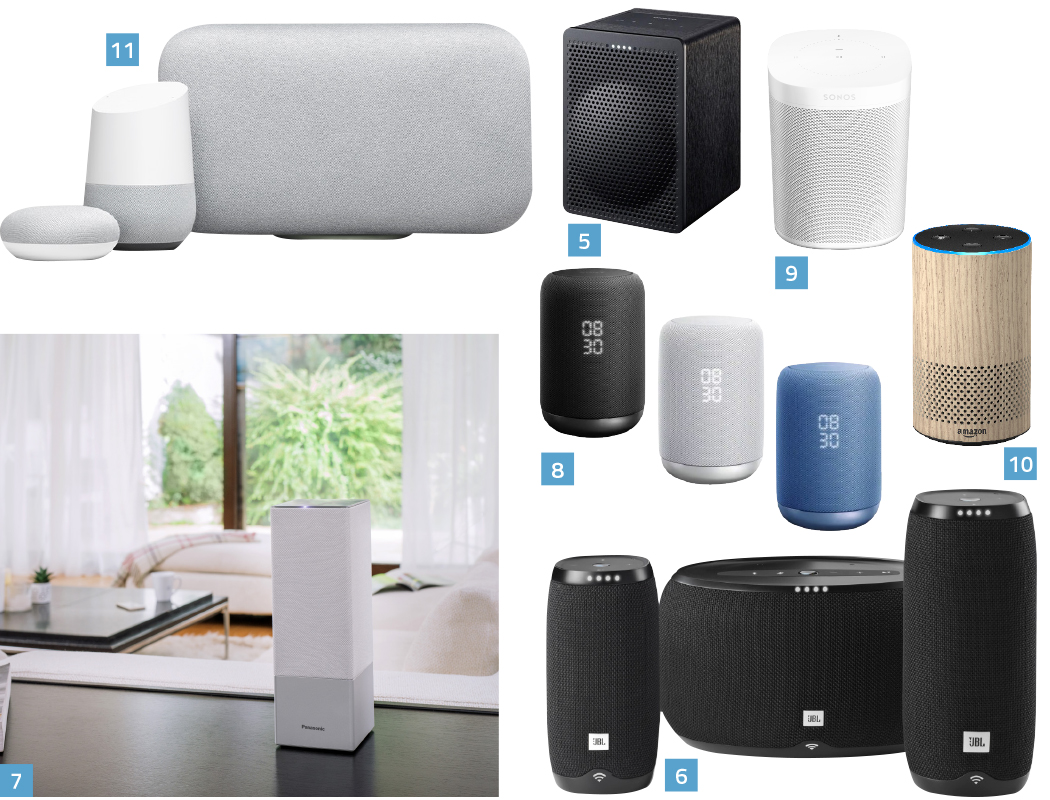 Sonos has also announced that, like Logitech, existing models will become voice assistant-capable via a software update.

And, as if to underline the real significance of this new and rapidly proliferating product category, fairly soon after IFA, both Amazon and Google revealed their own extended smart speaker ranges.

Amazon’s Echo range now includes the option of linking multiple Echos for multi-room audio, one with a built-in smart home hub to more easily connect smart devices, one with a new emphasis on audio quality (10) and a model to replace your landline telephone.

Ironically, amongst all this smart speaking, of the big three, the companies that own the voice activated platforms – i.e. Amazon, Google and Apple – it may be the last to market who’s first to sell products here.

Indeed, Apple HomePod uses Siri, and will be available in other markets from December this year.

From a Kiwi retailer’s perspective, where to place these products?

Alongside the other smart home products currently gathering dust or in the wireless audio speaker section?

Neither placement quite hits the spot, does it?

As I said at the outset, this isn’t a features & benefits piece and I’m conscious that IFA was the debut for many other important products.

My view, however, on this occasion, is that the local industry is still far from firm about how to address and how to sell products that are broadly connected.

So look at all this as an “amuse bouche” – something to get your technology taste buds working and kick your grey matter into gear because, ready or not, these products are on their way…